Under the patronage of the Ministry of Labor (MoL) & in collaboration with the General Labor Union in Lebanon,

Business Consultancy and Training Services Company (BCTS), as a partner of the European Union - ENI CBC MED funded project, is cordially inviting you to a press conference and Stakeholders meeting.

Aim: To update the Press and the Stakeholders about the goal of MoreThanAJob project planned activities and expected results

MoreThanAJob project aims to enforce social inclusion of vulnerable,unemployed population by applying best practices for more effective collaboration of the Social and Solidarity Economy (SSE) actors with the public administration. 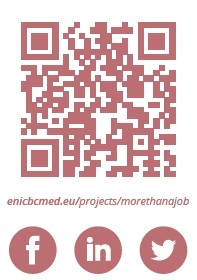 MoreThanAJob is a project funded by the EU under the ENI CBC Mediterranean Sea Basin Programme with a budget of €2 million, out of which €1.8 million as EU contribution and 10% as co-financing. This document has been produced with the financial assistance of the European Union under the ENI CBC Mediterranean Sea Basin Programme. The contents of this document are the sole responsibility of Business Consultancy and Training Services - BCTS and can under no circumstances be regarded as reflecting the position of the European Union or the Programme management structures.