MoreThanAJob in Lebanon fosters dialogue amongst vulnerable women to further enhance the psycho-social well-being and explore the role of women in building financial autonomy
Saturday, 30 July, 2022

On the last week of June, 2022, Common Effort (CE), a subgrantee of MoreThanAJob in Lebanon, put in motion its ongoing project and initiative under the title of “Psychosocial and Economic Resilience of Women in Deprived Areas” in the South region. Common Effort started its mapping activities for beneficiaries and local entities for psycho-social support referrals. CE extended its outreach to encompass Saida, whereby 200 beneficiaries were contacted and 40% participated. CE outreach officers followed a rigorous needs identification process prior to selecting the final beneficiaries. To conduct a more extensive outreach, the mayor of Bramiyeh in the South was contacted to acquire any previous database containing information on all vulnerable women in their communities. A total of more than 500 women, living on the poverty line or below, were contacted from several regions across Lebanon. Thus, after carefully mapping the areas and targeting beneficiaries, CE set out to arrange its center in Bramiyeh (in the South) to implement its series of training.

Similar to the previously implemented sessions in the Bekaa, the “Psycho-social and Economic Resilience of Women in Deprived Areas” project included several sessions that were implemented in a systematic and efficient way. The sessions focused on enhancing psycho-social well-being through peer-to-peer (P2P) counselling, strengthening economic resilience through social business development workshops, and fostering efficient dialogue. To ensure that no beneficiary’s mental health or psychological concerns were left unattended to, and to prohibit such issues from hindering their ability to fully immerse themselves in the training content, 3 expert counselors were recruited to conduct psycho-social well-being (P2P) counselling sessions. The beneficiaries then underwent a thorough assessment of their needs and interests before being divided into sectoral productivity clusters. The clusters were divided into 3 categories: Fashion and accessories, Agro-industry, and Education. Sessions focused on strengthening mental health and fostering economic resilience of underprivileged women emerging from host and refugee communities.

Building on sessions conducted earlier, a total of 18 training sessions took place, each consisting of 63 hours. The training sessions were implemented along the following divisions: 56% in Ain Kfarzabad, and 44% in Bramiyeh. The initiative also included a series of interactive parallel sessions identifying challenges, solutions and recommendations for empowering women towards strengthening their resilience. It featured several innovations and good practices showcasing diverse interventions that sought to empower women and girls while increasing their capacities towards resilience. 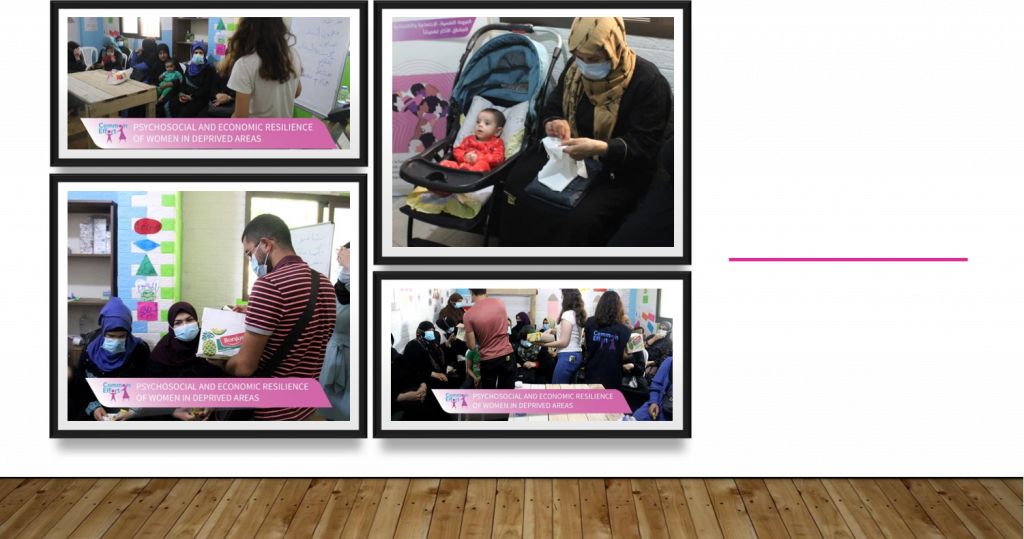 Focusing on the main theme of “Strengthening Psycho-social and Economic Resilience of Women in Deprived Areas”, the initiative provided a platform for sharing and learning, availed an opportunity to further explore the role of women in building and strengthening resilience and promoted dialogue and sharing of experiences on gender responsive resilience related programs and policies in Lebanon. After receiving their P2P counselling sessions, the beneficiaries were able to receive their desired technical training. The training content focused on essential skills that can be utilized for the development of businesses and the garnering of sustainable income. At the end of the training sessions, all the beneficiaries were thoroughly encouraged to expand their business strategies by teaming up with other beneficiaries and establishing social enterprises. The interested beneficiaries, totaling 84% of the overall number, were extensively informed on the numerous possibilities of forming alliances to enhance and promote their businesses. Through the Regional Resource Mobilization meetings with stakeholders, CE was able to refer 5% of the beneficiaries to the relevant employing bodies within their regions, whether that be small and local shops, to larger establishments. 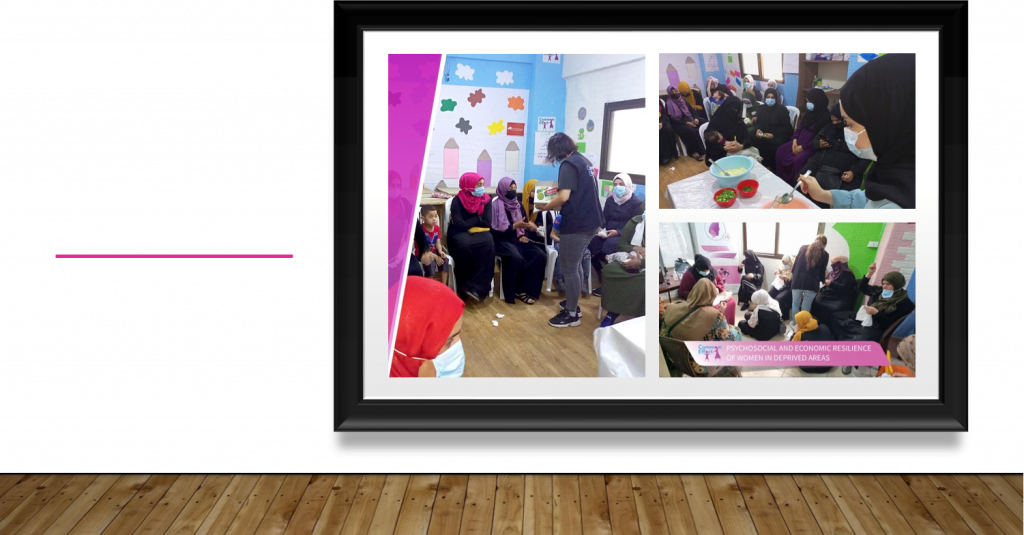 In additional efforts to increase cooperation amongst stakeholders and establish synergies, a total of 27 WhatsApp groups were created to entertain dialogue between all stakeholders of specific productivity clusters. All participants of the group showcased wonderful and helpful energies, whereby they enthusiastically helped each other recall the content of the training sessions and exemplified the knowledge acquired by sending pictures of their own created products. After creating common platforms to promote the establishment of synergies between stakeholders from varying SPCs, CE observed significant, positive interactions, strengthening the sustainability of the synergies established between those prominent cooperatives.

Despite the critical circumstances Lebanon had been and is still currently passing through, with dramatic economic and socio-political challenges, CE was able to overcome all faced challenges and successfully achieve the purpose of its initiative.  The most significant challenge was the instability of Lebanon’s current socio-economic conditions, which drove multiple potential beneficiaries to forgo participating in the project in favour of working menial jobs to safeguard an income. To overcome this obstacle, much work and convincing was done by the outreach officers to fully explain the benefits of the program to the beneficiaries.

Additionally, CE was successful in creating a safe space for the underprivileged to open-up, voice their tragedies and reach out to the support team. Many beneficiaries approached CE facilitators and employees, testifying against cases of domestic abuse, whereas others shared their experiences during the training sessions. Of these outspoken beneficiaries, CE was able to refer several of them to a specialist or civil society organizations.